All female followers, married (including virgins also) and widows shall never take bath without clothes on their person. They shall never conceal the period of their menstruation.

Now explains the common religious duties of widows and all other women. The duties of those married woman whose husbands are alive, have been given in these two Shlokas. The woman whose husbands are alive, and the widows, should not take bath without cloth on their person, because doing so is an insult to deity Varuna. Bhagwan has said to Gopis: You are practising Vratt, and now having bath in the river without cloth on your person. That is an insult of the deity.' Same is applicable to men also, therefore, no man should take a naked bath. Suvrata has said, 'To have a naked bath or to sleep without cloth on person, both are acts worth condemnation for a man.' Vasishtha Smriti says, 'Never to ride a bullock, donkey or a camel, never to cajole a woman in day time and never to take a naked bath, naked walk or naked sleep. Shankha Smriti says 'Do a one day fasting on a day time sexual intercourse, on bathing in water without cloth on person, and on looking at a naked woman of others.'

As the women of the world have shared with Indra one quarter sin of the Brahmhatya committed by him, that share of sin in women appears every month in the form of menstruation. This should not be kept secret. Such woman in menstruation, should not join domestic chores, and should not touch others. The touch of a woman in her menstruation period attracts sin of killing a brahmin. Shrimad Bhagwat has said,' women have accepted that share of sin with a carnal desire and therefore it appears in every woman every month in the form of menstruation. Therefore, touching utensils and other domestic objects during such period attracts major calamity. More details on this can be had from famous religious story of "Rushi Panchami Katha." 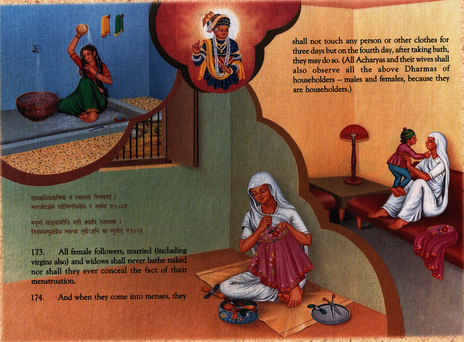