They shall never go to a place of a house holder except for the purpose of taking food or religious assembly and shall never while away their time but shall pass it in devotion of Lord Shri Krishna.

They should not visit the houses of the householders except on an occasion of Bhiksha or a religious assembly there in these houses. Bhiksha means to move about the places to beg meals as an ascetic, please take care to interpret it in that sense. An assembly means a Sabha (meeting) or gathering (to be in large group) wherein people of the society are gathered. Word Sabha (meeting) is being used in relation to a social, a gambling, a discussion and a temple. In event of a Sabha too, one has to attend it only on an invitation to that effect. The food sustains the vital air, therefore, one should try at his best for the food; that is the preaching of God. It is said in Niti-Saar, that even if he is not invited, one should attend holy-fire, and should attend a Sabha only on an invitation. Therefore, an ascetic should visit the residence of a householder strictly on these two grounds, and a visit in such circumstances is not at all objectionable, but attracts the drawbacks in rest of the circumstances. He, now says about the manner in which a meal is to be begged by an ascetic. An ascetic should look at the house with open door, and ask for a begging by chanting Shri Hari's name loudly, without looking at the women in the house. Here it is advised precisely to chant loudly, means has to stand outside the house while begging a meal. And when attending a Sabha (meeting) should speak just and with proper scriptural support, but should not sit dumbly. Moreover, it is said that a wiseman should not recall the draw backs of a host while attending a Sabha, because when he is in such a Sabha, if he does not speak or speaks something against the host, would attract a sin for that ignorant host. Further, such an ascetic should not waste a single moment without devotion of God. He should do devotion of God within his personal capacity throughout the day. He should not waste any moment in other activities. All supportive statements, in regard to such devotion and full-time devotion, one may have from the discussion held earlier in relation to "Atmanivedi Bhakta" - a single-minded devotee, an absolute devotee. 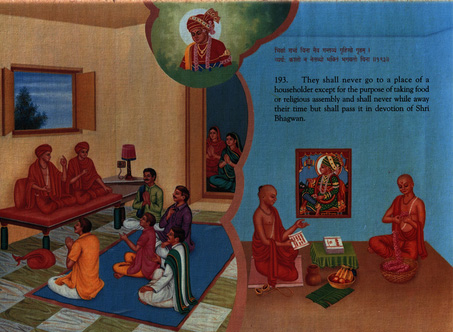