Messenger service means to deliver a message to others or receive a message from others to deliver it to someone. This may be an oral or written form. One who acts like this is called a messenger. Messenger-work means act of passing on or receiving on behalf of others, such messages. If we look at this as a grammarian, we should study the grammatical observation of Vaman: An adjective describes some more about the object, when an adjective and a noun are together, only one should be taken for the meaning of that pair. The acts of a messenger is called messenger work. Backbiting means to disclose before some one the secrets of other's, in a most secretive way. They should not do none of these. They should not act like a secret agent. Should not gather secret information of others and should not disclose it secretly before the others. Because these four acts destroy the virtues of openheartedness and indifference. Backbiting brings cruelty in a saint and spoils him. As there is 'etc' suffixed to the word, these includes household matters. Ascetics have no right for it . Yagyavlkya has said, 'household-dealing carried out by an insane or a sick or a child or a scared one or an intoxicated one or a proudly or a detached one can not be taken as granted. Here, detached ones means those who have disowned their worldly relations - Brahmcharis (celibates) and Vanprastha (those who are in their third stage of life span and have withdrawn themselves from householder ship.

Moreover, they should discard their ego for the self and for the body. It is to be understood that such disowning is to be carried out by self control. They should not establish affection for the family and relatives. 'etc' means objects like utensils and clothing . They should not attach themselves to such objects. Because such objects are deprived of spiritual touch and relations. Those, with affection and love or other such feelings, can not attain emancipation, as per Bhagwan. Bharat says that the emancipation can not be imaginated for those who are tied in the knots of love. Bhikshu Gita suggest a definite fall for those who nurse ego and affection. 'The people with ego and affection wear their mind as body and introduce it as 'I' or self, and consider rest as 'others' and consign themselves to hell due to such illusion. Yudhishthira treats them as animal : 'Oh Madhava ! Oh Victorious ! I and mine, you and your, all such beast like attributes are not in your devotees.' As Manu Bhagwan has said, to take soul as body and nurse animity is not the path of the saints following their God. Prahladji has said that such following pollutes intellect with animal instincts and with the difference between the self and others. Shri Shukdevji also has said 'Oh King! leave aside your animal like thinking which generates fear of death. This is why Prahladji also advises to leave such beastly thinking. Discard evil thinking born of Moha and body, in the form of I and mine. As per Satirugra Shrava the one, who is free from all the vices, attains divine abode of God: Though who are free from the ego generated by body and house, attain the highest position in abode of Lord Vishnu. God stays far away from the egoists, as per the prayer submitted by the elements: Oh Bhagwan ! Your lotus like feet are far away for those who are nursing affection in perishable body and family, and indulge in sentiments like I and mine. We worship and pray to such lotus feet.' Vasishtha has said, 'An ignorant man can not detach himself from the world, till he has affection for his body and bodily relations.' Therefore, Brahmaji has said that those who are blessed with the mercy of supreme and omnipresent God, Swim through the ocean of worldly Maya. They never attach themselves to their perishable body which is like a morsel for dogs and foxes; and they never think in the term of 'I' or 'mine'. More details on this can be had from Bharat Akhyaan. 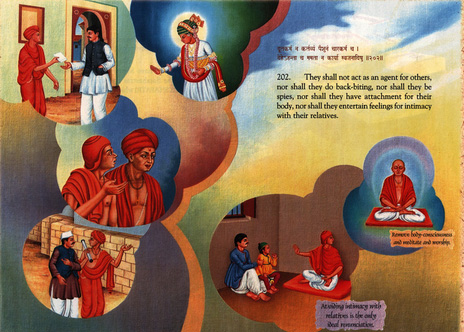