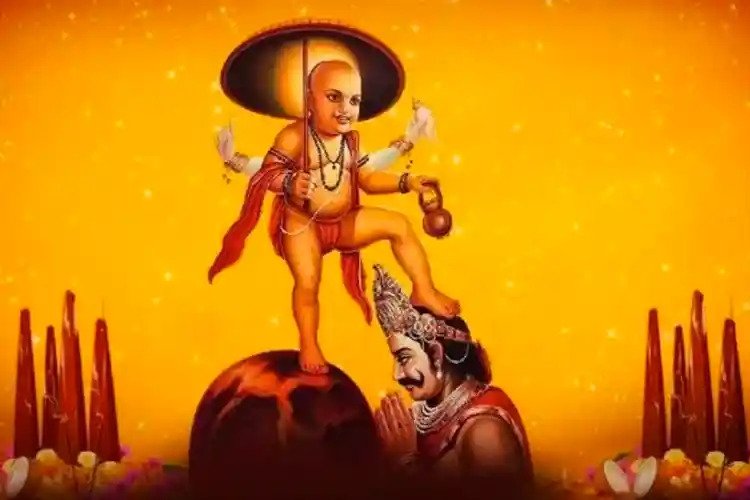 The festival of Vaaman Jayanti celebrates the birth of Lord Vaman on the 12th day of the bright half of the month of Bhadarvo.

In the 3rd Vachanamrut of Gadhda Pratham Prakran, Lord Shree Swaminarayan commands His Devotees to remember the pastimes of the Lord during His various incarnations and manifestations even if one is always conscious of Him.

King Parikshit was very much anxious to know the mystery of why Lord Vaman begged for three paces of land from like a poor man from King Bali yet being the proprietor of everything that exists.

Sage Shukdev elaborated that when King Bali; the grandson of Prahalad and the son of Virocana, lost all his opulence and died in the fight with the demigods, Sage Shukracharya, a descendant of Sage Bhrugu, brought him back to life. Due to this benediction, the King became a great disciple and began to serve him with great faith, offering everything he had.

The Bhramin descendants of Sage Bhrugu were very pleased with the King, who desired to conquer the kingdom of Indra (Swarg). Therefore, after performing the necessary principles they engaged him in performing a spiritual sacrifice called Vishvajeet thorough which he received various equipment for fighting.

King Bali was now extremely powerful due to the benedictions bestowed upon him by the Bhramins and thus embarked to conquer Swarg with his divine weapons. The demigods fled the kingdom at the advice of their spiritual master, Sage Bhruhaspti as they were no match for Bali’s strength and valour. He also advised waiting until the situation of the enemies is reversed and leave the heavenly planets (Swarg) and go elsewhere.

The Bhramin descendants of Bhrugu were very pleased with their disciple after his victory in conquer of the entire universe and engaged him in performing one hundred Ashwamedh sacrifices.

Throughout the three worlds, Bali gained great reputation in all directions shone in his position. Thus thinking himself very satisfied, very opulent and prosperous he began to enjoy the kingdom.

Aditi, the mother of the demigods lamented as if she had no protector and spoke to her husband Sage Kashyp. He advised her to perform an austerity by the name of Payovrat strictly following its regulative principles through which the Lord will be please and fulfil her desires.

Due to Aditi conquering her senses and performing this ritualistic ceremony, the Lord became extremely pleased and appeared before her. He agreed to become her son and protect the demigods and thus bestowed His benediction upon her.

On the day Shravan Dvadashi [12th day of the bright fortnight in the month of Badhrapad], during the auspicious moment of Abhijit, Lord Vaman appeared in this Universe.

He appeared in His original form, with ornaments and weapons in His hands and in the presence Kashyap and Aditi, assumed the form of a celibate Bhramin dwarf.

Lord Vaman then performed a ritualistic ceremony to the sacrificial fire on the sacrificial field. He then proceeded to Bhrugukaccha located on the Northern bank of river Narmada where King Bali was performing the Ashwamedh ceremony.

He received Lord Vaman with a proper reception and respectful obeisances worshipping Him by washing His divine lotus feet and also performing other ritualistic welcoming ceremonies. After this he offered his respectful prayers and requested the Bhramin-dwarf to ask what whatever He desires.

Lord Vaman asked for a mere three paces of land and the King agreed to fulfil His wish. Sukhracharya came to know of this and immediately approached Bali informing him of the trueness of this Bhramin-dwarf. The king was steadfast on the promise that he made and disobeyed the commandment of his spiritual master hence he was cursed that he shall very soon be bereft of all his opulence. The king never deviated from his determination and according to custom offering water to the Lord gifted of land he had promised.

Thus the Lord began to increase in size and His whole body covered the three worlds. With one footstep He covered the surface of the Earth, the sky with His body and all directions with His arms. The heavenly planets were covered with the Lord’s second footstep and not even a spot then remained for the third one.

Due to Bali’s false pride of his possessions, he promised the Land to Lord Vaman but was unable to fulfil it. Hence the Lord ordered for him to live for a years in hellish life. However Bali wanted to correct his mistake and so he offered his head for Lord to take the third step on.

Due to his great tolerance, the Lord gave him a place unobtainable even by the demigods and also said that he will become King of the heavenly planets during the period of the Savarani Manu.

The Lord ordered Bali along with his relatives and friends to live on the planet Sutala made by Vishwakarma (Architect of the demigods) on Lord’s orders. It is specially protected by the Lord Himself and free from mental and bodily miseries such as fatigue, dizziness, defeat and all other disturbances.

Bali was be able to see the Lord and thus seeing His supreme prowess, the Kings materialistic ideas and anxieties arisen from demonic association were immediately vanquished. The demigods then regained the heavenly planets through grace of Lord Vaman.

This discourse is described in great detail in Shreemad Bhagwat and whosoever hears or recites it is certainly elevated in spirituality and delivered to higher planetary systems or to Akshardham.

The Hemadri Khand of Bhavishyottar Puran also entails this Avatar of the Lord. Furthermore it also contains how one should observe this day’s austerity and ritualistic ceremonies.