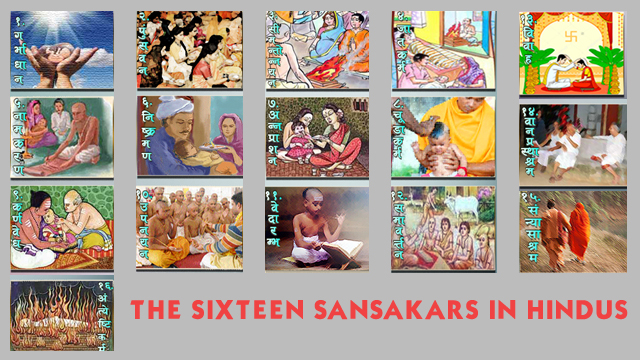 In our Hindu Sanatan tradition, sixteen Sanskars are performed during the life of a human being. Sanskars means Sanshodhan-Parishodhan-Parishuddhi. Our scriptures cherish faith and belief in re-birth. Through Sanskar, Shudhi (purification) of Jeev (soul) is performed through all three types (Adhyatmik-Aadhibhautik- Aadhideivik). Our scriptures consider the human birth as eligible for Moksha-Mukti, it can uplift itself by becoming Dosh0Mukta through Sanskar. By performing Sanskars in every stage of human life, a Jeev can get rid of and can purify itself from all types of impurities carried with itself of all previous births and lives while passing through eighty four lakh yonis. Sanskars has been considered as an essential rule for the human being and so it is mandatory to observe this rule. A person who does not observe these sixteen Sanskars in his life, his life is rendered incomplete. Or if one or two Sanskars are left out, there remains its defect in his life. Our ancient Arya tradition cherishes utmost trust in sixteen Sanskars and they are found in tact in the life style of the people residing in the rural areas. These Sanskars impact the human life scientifically. At the time of performing all these Sanskars, chanting of Vedic Mantras is performed according to each ritual. Ishtadev Bhagwan Shree Sahjanand Sami has given directions to the devotees in Shloka-91 of the pious ‘Shiksha Patri’: “The Dwijas (twice born) shall perform the due rites following the conception of a child andperformdailyritualsand Shraaddh conception of a child and perform daily rituals and Shraaddh (obsequies) at the appropriate time according to the capacity of individuals.”

Names and details of these Sixteen Sanskars are as follows:

1. Garbhadhaan
In Hindu Parampara, Four Sanskars before the birth of a child and eleven Sanskars after the birth and one Sanskar is performed afterthedeathofaperson. Garbhadhan Sanskar is performed with an objective of the development and continuance of the progeny of the parents and with a view to get a noble and intelligent child. Prayer is performed to the pious Runanubandhi Atma and wish for Saubhagyavati is also cherished.

2. Punsavan
For the physical and mental development of the baby in the womb of the mother, this Sanskar is performed amidst chanting of the Vedic Mantras. Due to this Sanskar, a child is born and healthy and intelligent.

3. Simantonayan
This Sanskar is performed un completion of 4-6-8 month from the conceiving of a baby. As there has been physical and mental development a baby in the womb of the mother, behaviour and conduct and thinking of a mother are imbibed by the baby. As a baby emulates the mother in letter and spirit, it is in a way ritual for the mother for being alert in her achar-vichar-shravan etc.

4. Jatkarma
After the birth of a baby, Jatkarma ritual is performed wherein the baby is released from the Doshas of the birth-time and the Dosha of remaining in the womb of the mother and for the long life of a baby. After performing Suraksha Kavach of Dev-Devi of Kul Parampara, the concerned deities and Pitrus are satisfied through Pooja. Even Ghee and honey are touched at the lip of the baby and nabhi-dand is cut.

5. Naamkaran
Ritual of Naamkaran is performed on the 11th day from the birth of a baby. Learned Brahmins prepare Janmpatrika of the birth time and the baby is named accordingly.

6. Nishkramana
Nishkraman means to go out. On the fourth month from the birth, a child is taken out of home and at that he is granted Darshan of Panchmahabhut – Pruthvi, Jal, Tej, Vayu and Aakash and prayer is performed for the well being and health of the child.

7. Annprashan
On the seventh month from the birth, meals are offered to the child as an auspicious sign and on that day poojan of Annapurna Devi is performed.

8. Chaul
Between the age of one-three- five years from the birth, hair of the child is removed through Mundan Sanskar; so that intellect of a child is developed and the insects of the pregnancy time are destroyed.

9. Vidyarambh
Through this Sanskar, a child is initiated towards appropriate formal education and at that time poojan of Maa Sharda Devi is performed.

10. Karnavedh
Ears of a child pierced with the help of a golden needle and making it convenient the facility of wearing gold ornaments. Through acupuncture this also helps free flow of blood in the brain of the child so that memory power of the child is increased.

11. Upnayan
This ritual is performed in front of Guru by accepting a three- layered cotton thread popularly known as Yagnopavit. After accepting and wearing this Yagnopavit, a person is know as Dwij – born second time. In the knot of Yagnopavit are said to be residing Brahma-Vishnu-Shiv and in nine Sutra Tantu is said to be performed poojan of Omkar, Agni, Shesh, Chandra, Pitru, Prajapati, Agni, Surya, Vishwadev.

13. Keshani Samskar
During Brahmcharyashram, prior to starting education, head is kept clean shaved for Keshant – Siddhi of Brahmcharya because Kaamdev is said to be residing in Kesh.

14. Samavartan
This Sanskar is performed upon return of the child after completing his education.

15. Vivah
In this most important ritual, Agni is lighted and by performing Parikrama inthepresenceofAgnidev, bride and bridegroom take oath and perform Sankalp of adhering to Dharma assigned to each of them by this Lagna-Sanskar. And one gets rid of Pitru-run.

16. Antyesthi
After leaving this human body, agni (fire) which is lighted at the time of Lagna Sanskar is carried from home to crematorium and there body is offered to fire. By doing so, Atma becomes free from all types of Runas (obligations).