Ghanshyam Falls in the Well 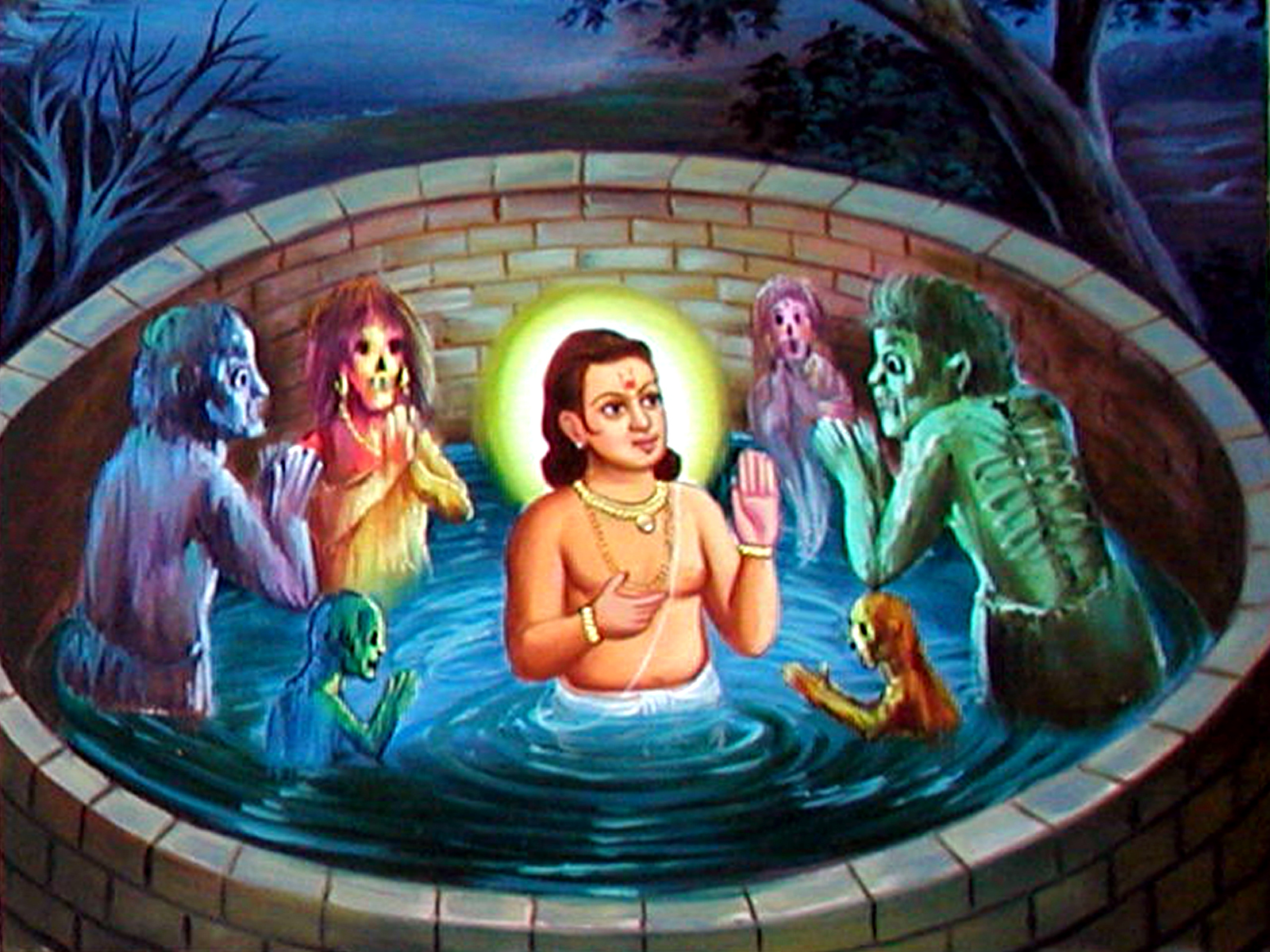 One day, after feeding Ghanshyam Maharaj, Bhaktimata sat Him on the edge of the water well situated in front of her home (where the birth-place temple presently stands on Chhapaiya). She instructed her niece (brother’s daughter), Balvantabai to look after Ghanshyam and went into the house to cook the family’s next meal. However, Balvantabai left Ghanshyam alone and went to her own home.

Whilst playing on the edge of the well, Ghanshyam fell in! The great serpent, Shesh Naag residing in Paataal (deepest hell) realised what had happened and hurried to Chhapaiya. Just as Ghanshyam was about to hit the water in the well, Sheshji fanned out his head and caught Him just above the water level.

Just then Bhaktimata came out of the house and looked around, but could not see her son. She began to worry, wondering to herself, “Where could Ghanshyam have gone? I left him just here with Balvanta.” Seeing his sister getting worried, Bhaktimata’s brother shouted to her, “Didi, He was sitting on the edge just a few minutes ago. Are you sure He hasn’t fallen into the well?!”

Bhaktimata rushed over to the edge of the well and looked in. She saw, to her amazement, Ghanshyam was seated above the water level! Bhaktimata screamed out to Rampratapji, who was seated with his father, Dharmadev. “Rampratap, come here! Quick! Look! Ghanshyam has fallen in!” Both Rampratapji & Dharmadev ran over to the well.

Dharmadev, Bhaktimata & Rampratapji looked in to the well. They saw a very bright light coming from the within the well. They could barely see through the intensity of the light. But, within the light they saw Ghanshyam sleeping on a bed created by Shesha Naag. They saw that Laxmiji was massaging Ghanshyam’s feet and many Parshads were praising His greatness. This sight astonished all three on-lookers.

Dharmadev & Bhaktimata recalled the occasion in Vrindavan, when Lord Shree Krishna appeared before them. Just then, the light disappeared. Bhaktimata saw Ghanshyam stretching his arms. So she stretched out and pulled Him out of the well. She pressed Ghanshyam to her chest and forgot all the worries of the past few moments.

Bhaktimata could not keep the event to herself and narrated it to Moti Tarvaadi, Vashram Tarvaadi, Sundaribai, Surjabai and other residents of Chhapaiya. The villagers listened to the narration with great intrigue and blessed Ghanshyam, commenting on His good fortune!

Do you believe Ghanshyam was fortunate? Or was there another reason for this event happening?