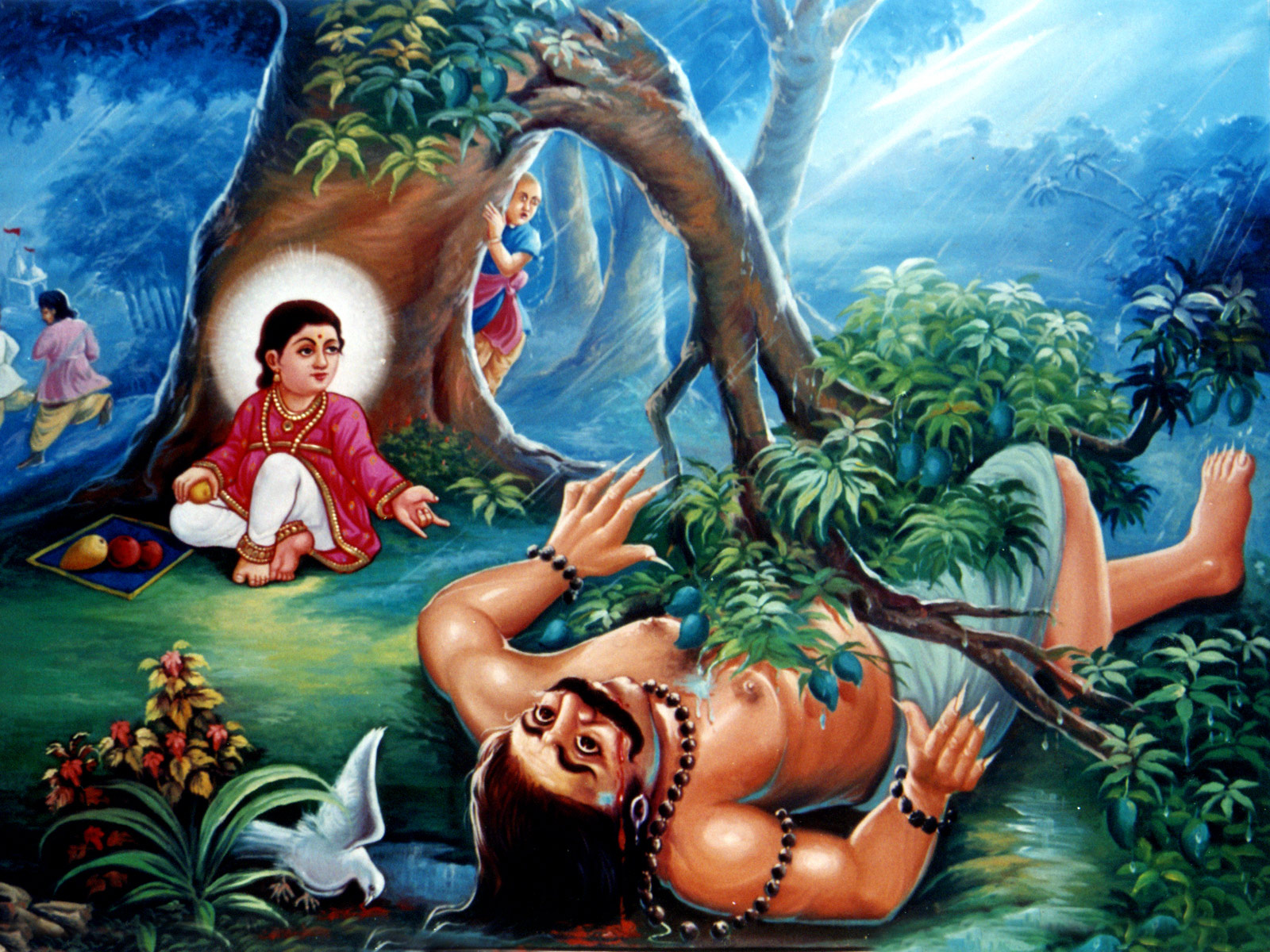 Kalidatta was very wicked. He wanted, by any means, to ruin and kill child Ghanshyam. Once child Ghanshyam was playing in a garden under a mango tree with his young friends. Kalidatta found his way with them in a deceitful disguise. He wanted to take charge of Ghanshyam. When Kalidatta tried to catch him Ghanshyam appeared to Kalidatta like a dreadful fire. So he fell back in his attempt. He decided to use his magic and black art. There was lightening and it was raining heavily (and there was torrential rain). Many trees fell down. Many creatures - animals and birds died. It was pitchy dark. No one could see anyone else’s face.

Child Ghanshyam remained seated under the tree where he was playing. Other children were standing under other trees and were afraid. They did not know where Ghanshyam was and no one could go to inquire about others in such a storm.
Kalidatta took this opportunity, He created such an illusion that he fell with a mountainous body on the tree under which GHANSHYAM was sitting. That mango tree fell on Ghanshyam. It did fall, but it was not wicked like Kalidatta. The tree fell on Ghanshyam covering him safely like an umbrella. Now Ghanshyam had full protection against the storm and rain. Kalidatta was stunned. He rushed again to grab [ a hold of ] him, when he saw that Ghanshyam was alive. But no sooner did his eyes meet with Ghanshyam’s began to run helter skelter like a possessed man. He was crushed tham he under a tree that was falling in the cyclone and died.

On hearing this, Sundaribai was very much afraid. She ran and reached near the mango tree. She saw that child Ghanshyam was merrily playing as if nothing had happened. “Hari is found. Hari is found.,” shouted aunt Sundaribai. Bhaktimata and others rushed there. Aunt Sundaribai took child Ghanshyam and placed him in Bhaktimata’s lap. Mother’s joy knew no bound. She took off a valuable necklace and gave it away to Sundaribai. Nothing is so precious as for the happiness of finding out Ghanshyam.