Mahima of Lord Shree Swaminarayan and the devotees of Kutch

Lord Shree Swaminarayan was always attracted by the divine attributes of the devotees of Kutch. After his appointment as the spiritual leader of the whole Sampraday, He visited Kutch in the month of Maha Sud 7 Samvat 1860. He spent 30 years of His total lifespan in Gujarat and visited Kutch more than 20 times (His total time spent in Kutch was 7 years). As a result of His frequent visits, a series of inspirational devotees realised that He was none other than the Supreme Purshottam Narayan Himself.

Bhuj is one of the six places where Lord Shree Swaminarayan constructed the temple Himself. This divine thought of Bhagwan Shree Swaminarayan alone signifies the vast amount of spirituality the land of Kutch offered not only in the past but even today.

Senior devotees Gangarambhai, Sundarjibhai and others from the Bhuj went to Gadhada where Lord Shree Swaminarayan was attending the famous fuldol festival. During the festival devotees from Bhuj met Lord Swaminarayan and requested him to construct a temple in Bhuj.

The Lord was pleased and more than happy to fulfil the wishes of His devotees. So Lord Shree Swaminarayan asked Vaishnavananand Swami to proceed with a team of saints to Bhuj and construct a temple. Vaishnavananand Swami and the accompanying saints went to Bhuj in 1822 and drew up plans for the original Bhuj temple. They executed the plans with every minute detail taken into account and within a short span of one year, on 15th May 1823, the Murti's were installed by Lord Shree Swaminarayan.

Lord Shree Swaminarayan had graced this temple in the western belt of India and had Himself installed the idols of Narnarayan Dev on 15 May 1823 (VS 1879 Vaisakh sud 5) and later Acharya Shree Ayodhyaprasadji Maharaje installed Hari-Krishna Maharaj on 06 March 1867 (VS 1923 Fagan sud 2).

Besides these, manifestations of the Lord at the central dome, under the eastern dome were seated Radha-Krishna Dev, Hari-Krishna Maharaj and under the western dome Ghanshyam Maharaj. Roop Chowki, the main square of the inner temple housed the images of Ganapati bapa and Hanumanji.

The Gujarat Earthquake of January 2001 destroyed much of the city of Bhuj, including the side of the temple facing north which was built by Lord Shree Swaminarayan. Miraculously the divine idols remained as they were, without any damage whatsoever.

However after a mutual agreement between Acharya Maharajshree, Saints and the devotees from all corners of the globe and given the circumstances of the irreparable damage to the original temple building, it was decided that the idols would be housed inside a new grand temple. It was collaboratively resolved to construct this new temple a short distance away from the original site.

The Uniqueness of the Swaminarayan Fellowship

Through the inspiration of Bhagwan Shree Swaminarayan, and the power of Bhuj Saints and Bhaktos from all over the world, a magnificent temple has been constructed using traditional Vedic architectural methods, on the banks of Hamirsar Lake. Since its first brick installation ceremony on 7 May 2003, it has taken 7 years for its completion. Based on a grand podium, the new temple faces East and is constructed mainly with pure high quality marble.

Expanding a 35,000 sq. feet area, this Temple has 7 sky touching pinnacles. It consists of one central dome, 25 minor domes and 258 pillars. The peripheries, which are beautifully carved into the icy marble of Makrana and Ambaji, give it heavenly beauty, serenity and the divine approach to the temple.

Aside from the primary temple focal point, BhujDham encompasses a number of accessory buildings:

Situated adjacent to the main temple, this newly constructed grand temple, with its own altar and assembly hall, allows up to a 1,000 female devotees to sit and pray.

The main office situated next to the Sabha Mandap.

Residence for approximately 200+ saints & bhagats, providing them the facilities to meditate, read scriptures and perform bhajan.

Capacity to seat 300 VIPs and 2000 general people together. 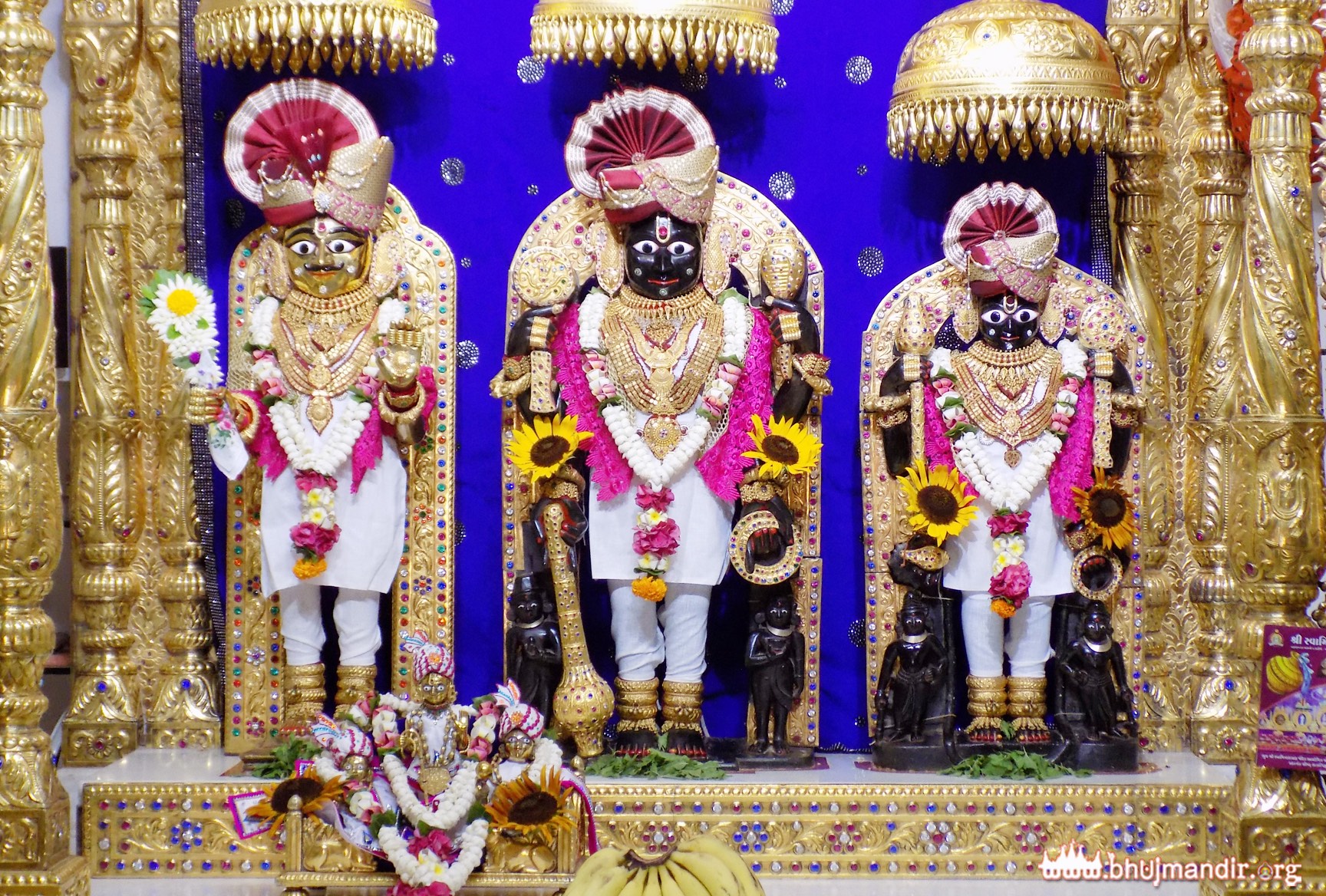 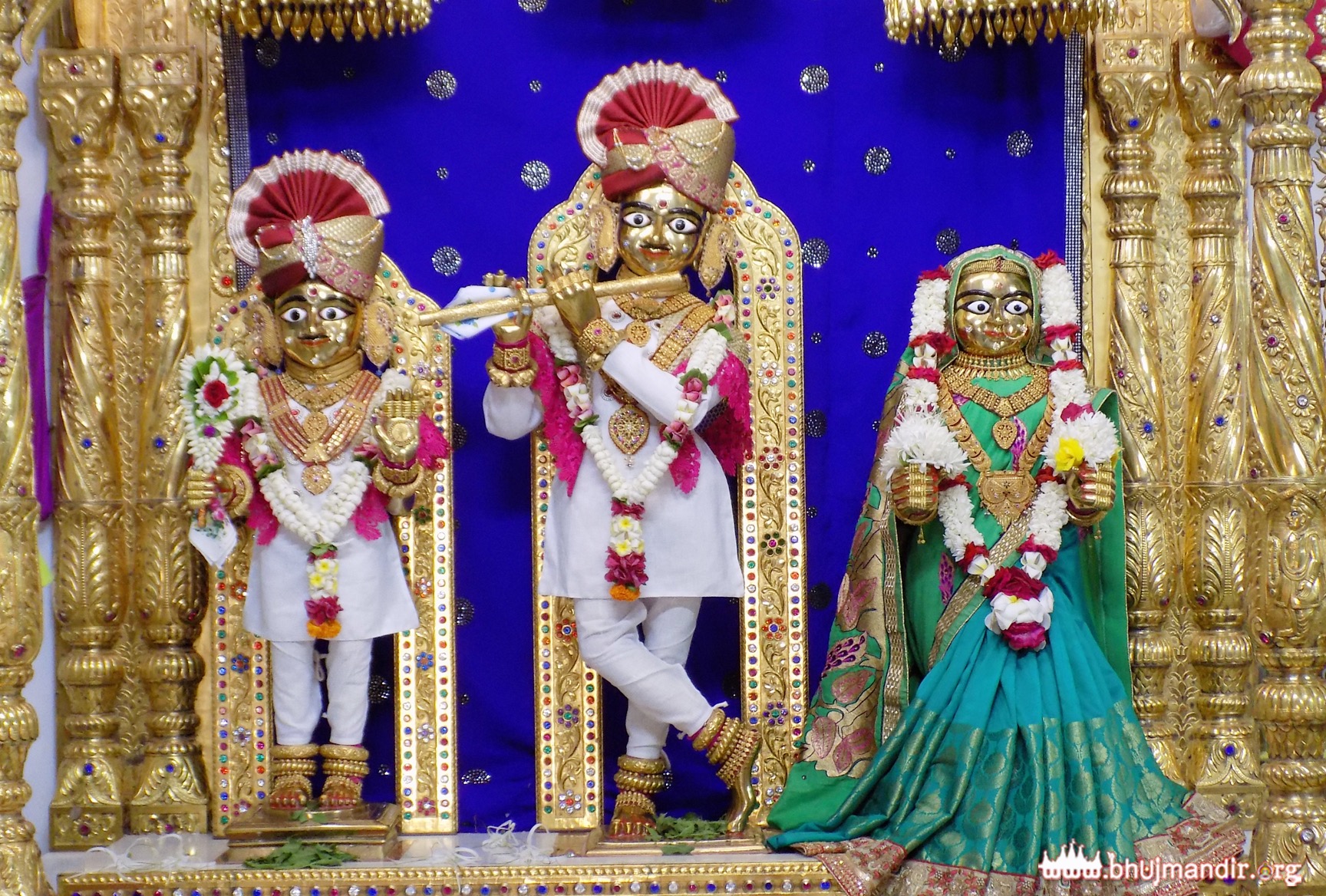 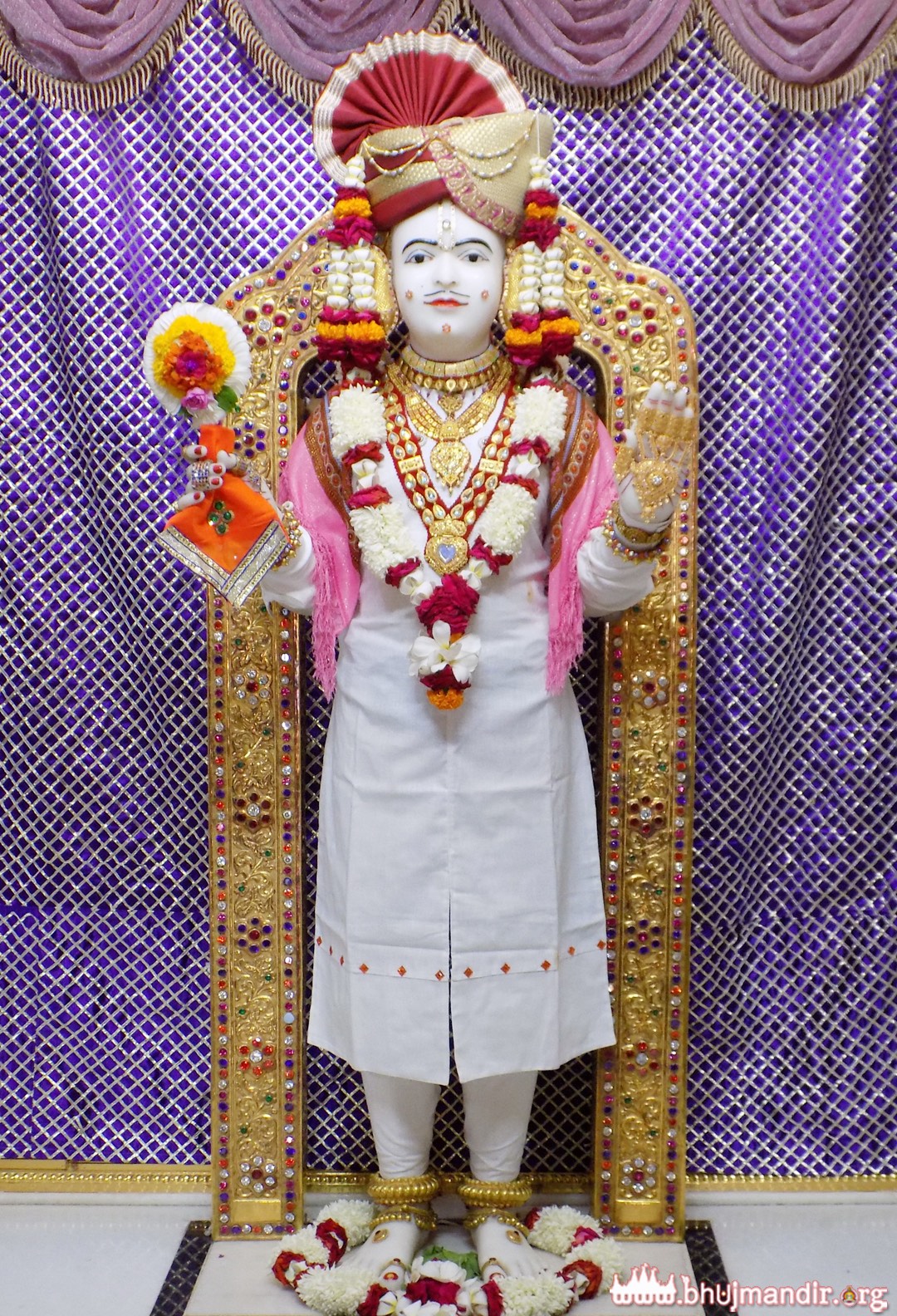 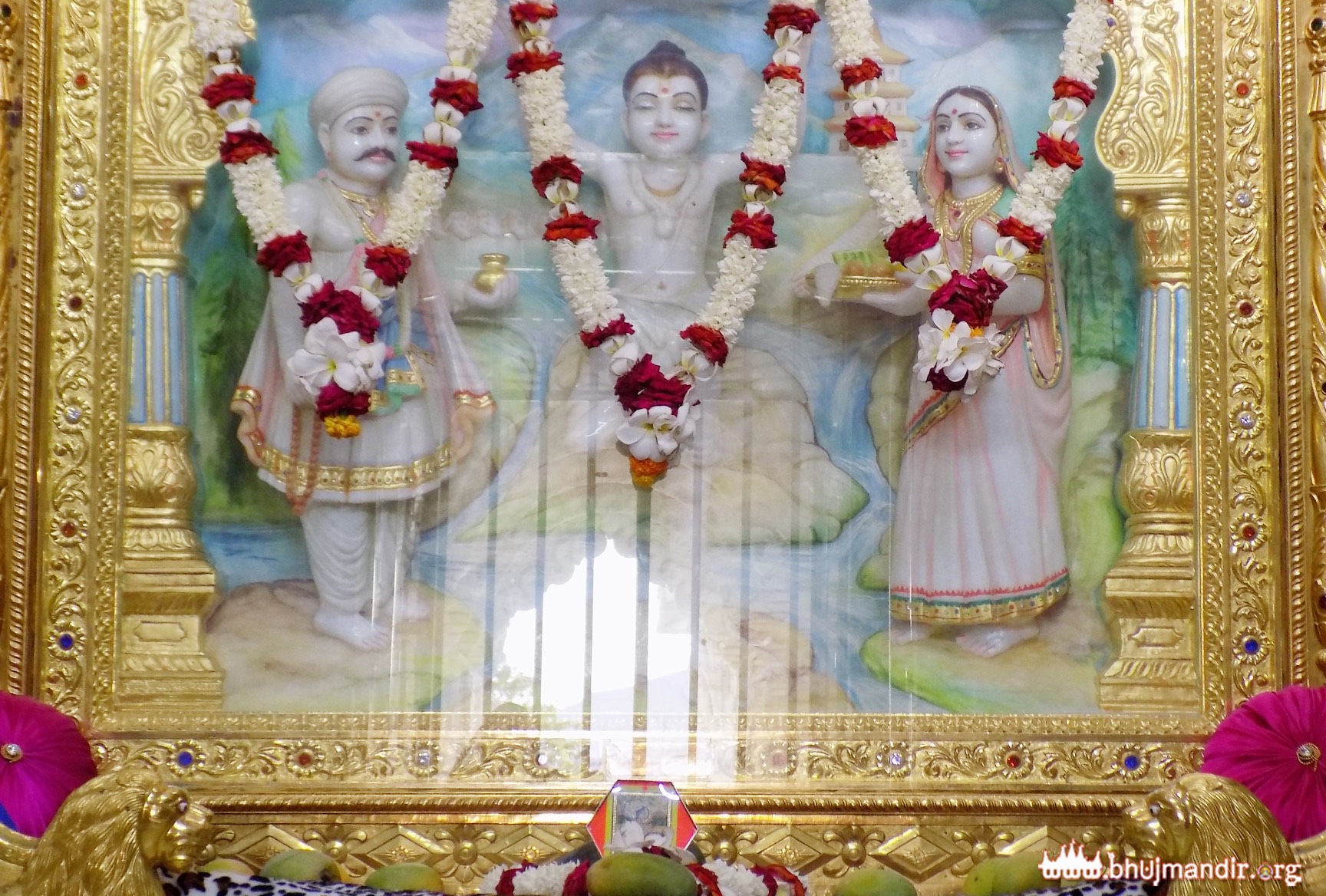 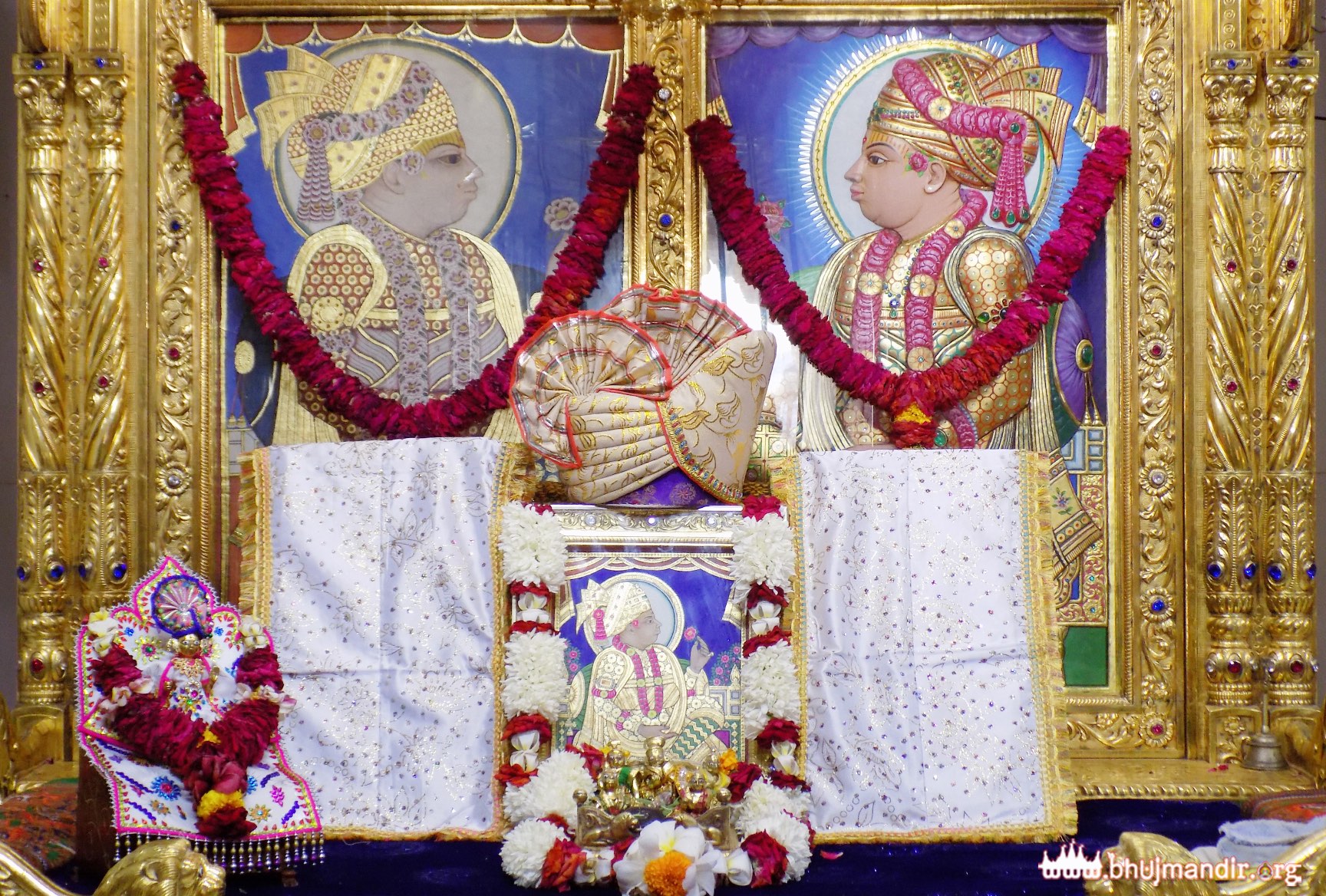 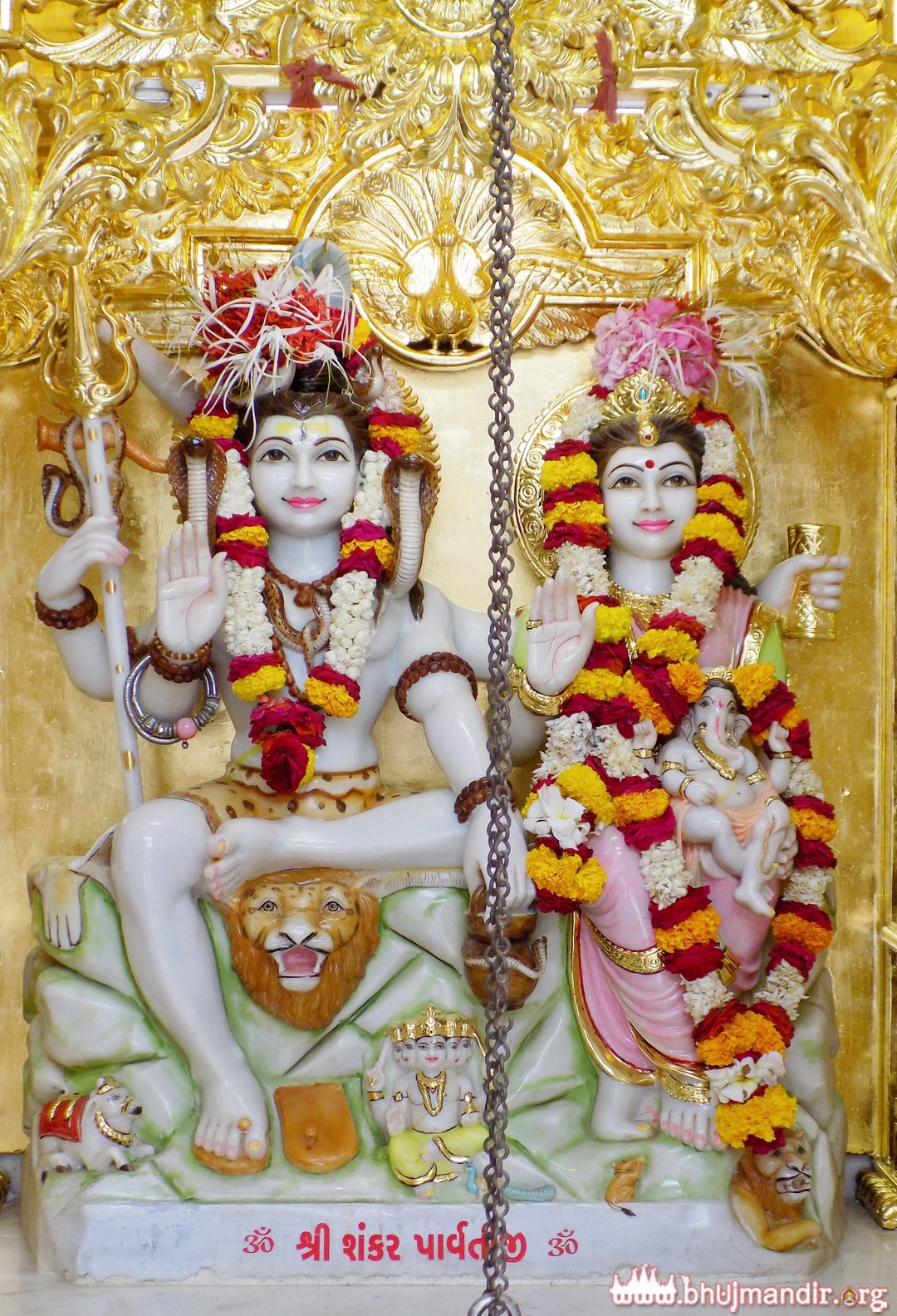 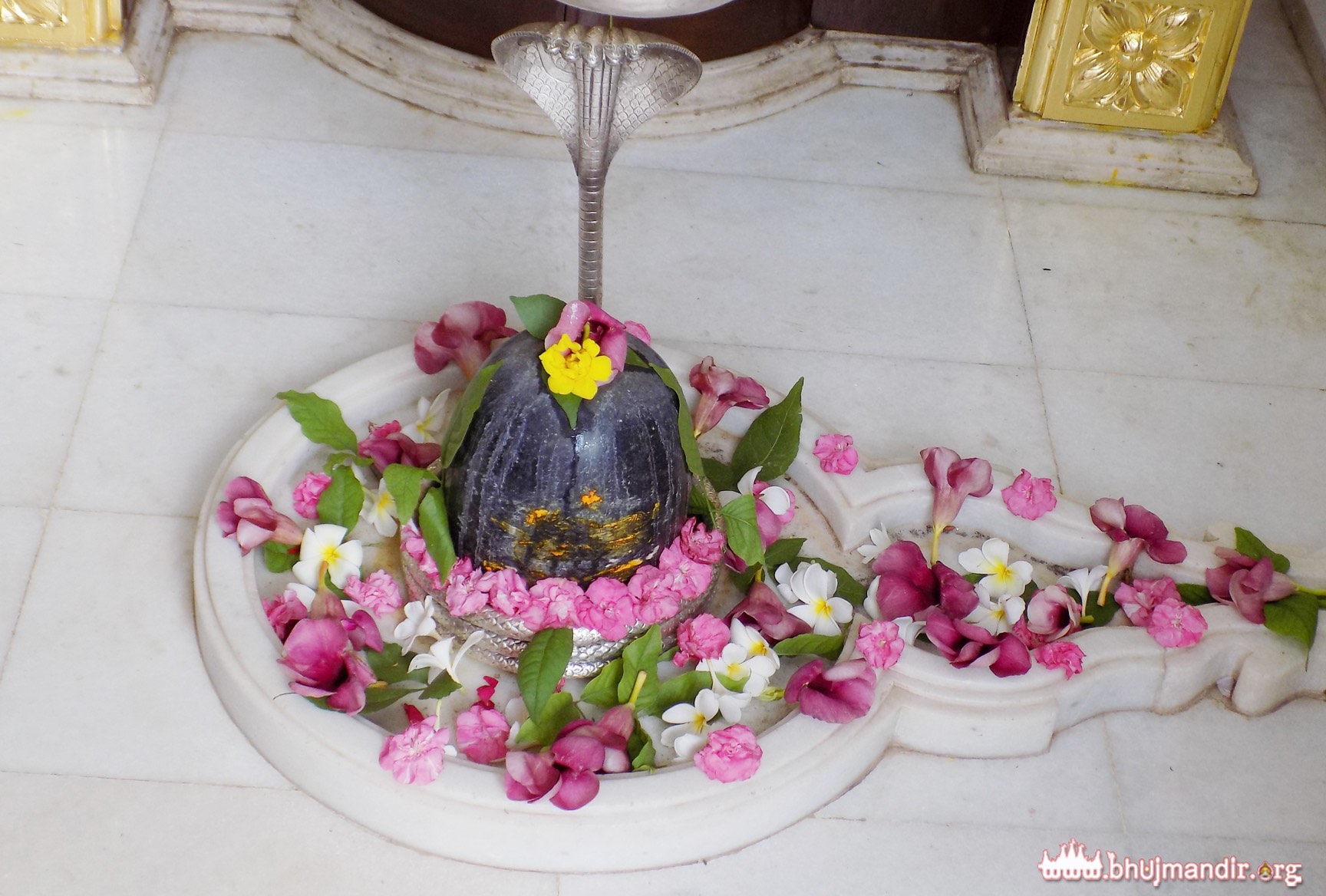 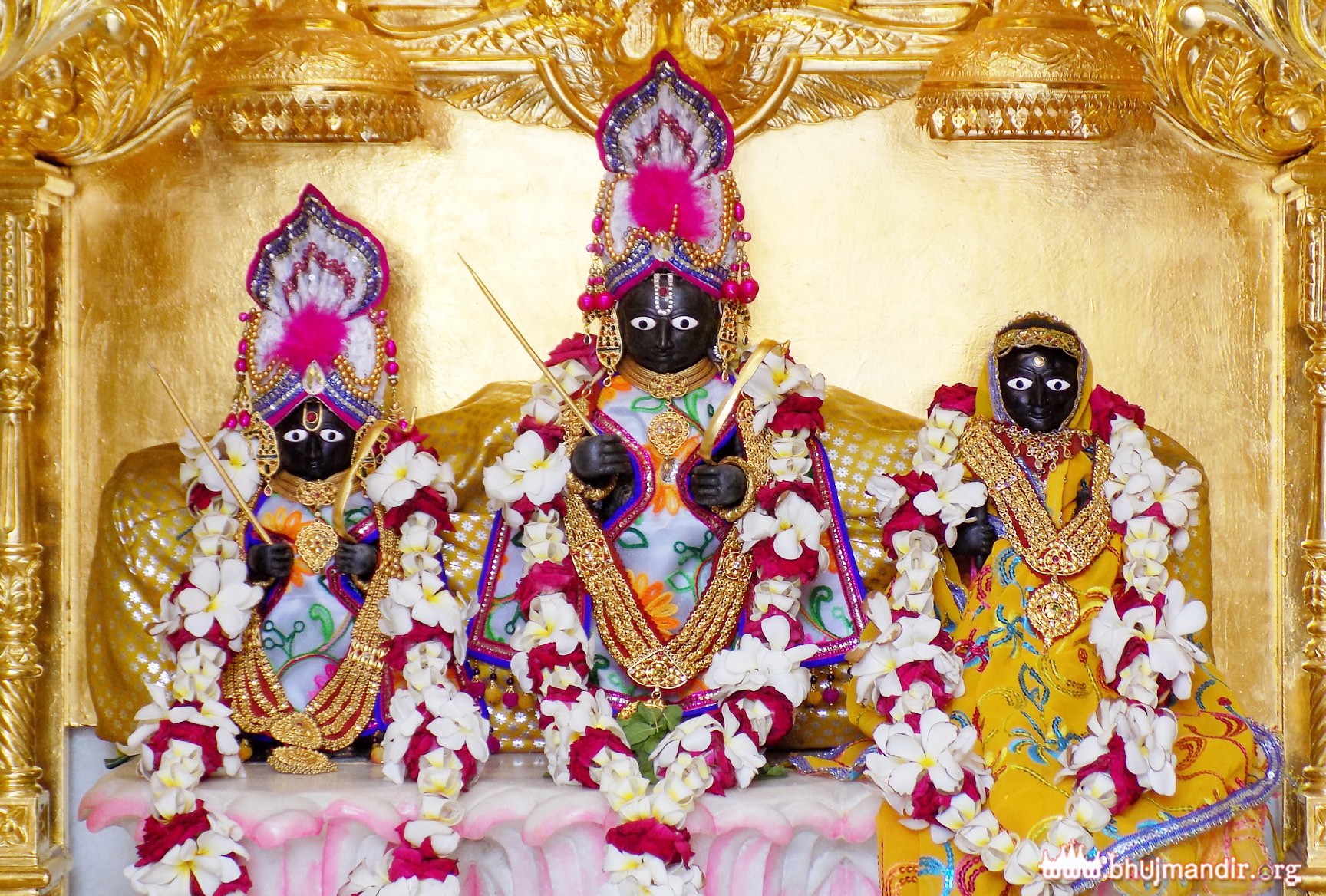